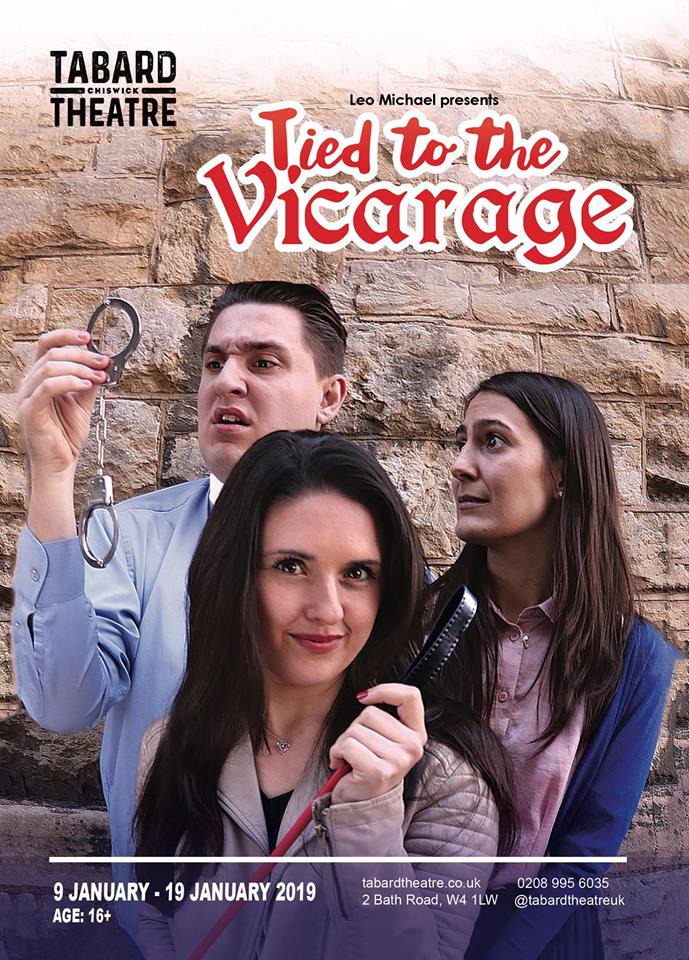 This production is playing at my local theatre – The Tabard Theatre until 19th January 2019 (official link).

I heard about the play from a promotional email from the theatre and it is billed as ‘The UK Premiere of risqué comedy farce ‘Tied to the Vicarage.’

The Tabard is a local venue to me, with the theatre situated above the pub of the same name. I got my necessary G&T from the pub and made my way to the theatre. Entrance to the theatre is via a few steps and through a small corridor to the side of the pub main entrance. The box office is situated in the small reception area entrance and I collected my ticket (G1) from the gentleman at the ticket box and waited for the house to open.

The theatre is small and intimate but a lovely space. With approximately 10 rows of seats with most rows being seats 1-5 then an aisle then 6-10 but, the front and back row are slightly different. Each row is raised on its own tier creating a stairway of seats to the back. The seats are and a standard flip down seating and quite comfy too. Even from the back of the theatre you will get a good view as it is not too far from the stage area.

As you enter the auditorium Geraldine (Will Langley) is walking around greeting the audience. This makes for a warm welcome and sets the ‘tone’ of the piece nicely.

My seat G1 was an end aisle with the wall to your right. A comfy flip down style seat with padded armrests too, with a good view of the stage and set.

The set is open when you take your seats. It is clearly a living room set. Three red walls with white skirting as a contrast run from stage right to stage left. The wall on stage right starts with a curtain on a rail(window) and this then runs along stage left. In the middle of this wall is a small white chest with a vase and flowers on. Above this is. Picture in a frame. Where this wall joins the back wall is an opening. The back wall runs from stage right to left. At stage right is an opening and you can see the last few stairs and handrail through it. In the middle of the wall is another framed picture. This leads into another opening. The last wall then takes over on stage left. In the centre is a small table and drawers which has a table lamp and picture frames on it. Next to this is a kitchen style chair which sits on far stage left. The centre of  the set is a large red rug with a coffee table on it. This is set with a box of tissues, a tea-tray with cups, milk jug and teapot on. On the corner of the table next to the tray is a small pile of two books. Behind the table is a two-seater couch and next to this, at an angle to the table is another smaller leather chair. It does look like a ‘cosy front room’ and sets the scene nicely.

The set is used for both settings of the vicarage and the out lying property which works well but may confuse some but it is also commented on in the script (or was it ad-libbed?) when James (Charles Camrose) says “…we even had the same interior designer…” which received a loud laugh!

The cast of eight, some of whom play several characters, create the whole piece and all work hard to make the experience pleasurable and this works particularly well in the second half where the true farce begins.

Charles Camrose (playing Rev James Clark) is excellent as the calm yet easily panicked Rev. He has a great voice and range too so that we can hear the stress building in the voice as things go on! He is very expressive too both facially and physically which enhances the character too. I loved the scene where he believes it is God’s voice calling him! I have to say that the role and the way it is acted has elements of Terry Scott (From the sitcom Terry and June and Carry On films)

Amelie Edwards (playing Karen Clark) is great as the ‘suffering’ Reverend’s wife. She has a way of portraying a strong character that although isn’t the strongest looking, clearly is strong enough to manage the situations she is presented with. A good voice and clear dictation means that you can hear and comprehend the script well. I loved the scene where she is trying to cover over the ‘new delivery’ and not sure if this was part of the action or it just happened but it made for amusing watching!

Miranda Shrapnell (playing Edward and Rev George) plays a brilliant character as Edward – a anorak wearing, girl shy lad who is being helped by Rev James (Charles Camrose). When she initially meekly enters the set with hood drawn tightly around her face, she received a loud laugh and this is maintained throughout with her comic antics. As Rev George she plays a member of the clergy who clearly has an interest in the goings-on at the vicarage.

Laura England (playing Sandra, Monica and Rev Isobel) really shines as Sandra. A bolshie, confident women who is literally hunting for her man! She has a great stage presence making you feel the fear of her by the other characters and this is used well for those scenes – especially as the farce plays out! As a total contract she plays Rev Isobel as a dower member of the clergy who is simply attending the vicarage as part of their duties.

Paul Hughes (playing The Bishop and Delivery Man) as The Bishop provides the backbone of the farce line. He has a great stage presence and this works well, especially in later scenes with Julia (Emma Von Schreiber) and Karen (Amelie Edwards). There were times where he seemed to be almost quoting lines as opposed to being the character but that did not distract from the plot. As the Delivery man he was great at being the lad who delivers the equipment and misunderstands things.

Michael Harrison (playing Tony, Peter and Plumber) is great as Tony, the hunted boyfriend of Sandra (Laura England) managing to switch easily between a calm and reasonable man to one who is scared and panics (especially when Sandra is near! We briefly meet Peter as one of Julia’s clients and this works well. As the Plumber he plays a real London geezer who gets caught up in things.

Will Langley (playing Geraldine and Ralph) is excellent as Geraldine (who we meet as we enter the auditorium) and is a slightly camp and meeker transvestite who is Julia’s cleaner and adds to the confusion of the second half. He has a great voice and character that enables him to be camp but also confident. As Ralph he is good as one of Julia’s clients who has a yearning for punishment – this greatly adds to the farce elements of the second half.

Overall this is a fun production and whilst the slower first half sets up the frantic second, the two halves ensure that you leave the theatre smiling and aching from several belly laughs!

One thought on “Tied To The Vicarage – And Other Areas!”